Bioinformatics is growing as a market and as a field. Just looking at the diversity of questions covered by Bioconductor shows us that "bioinformatics" is no longer just the realm of sequence comparison.

BeDataDriven, the Dutch company behind Renjin, has recently become involved in bioinformatics, and needed a base of representative testing/benchmarking code to help develop Renjin for bioinformatics applications.

Forked from and inspired by GenBase, GenBench is an attempt to build up some ecologically valid benchmarks and tests for bioinformatics. Another nice example of this is RforProteomics, see their project and accompanying paper.

This benchmark does not cover all possible operations performed in bioinformatics/genomics. In particular, we chose to not focus on (pre-)processing of raw data and instead focus on higher-level processing typical for a range of datatypes. We have examples for microarray and mRNA-seq, some proteomics and genetics, machine learning and data integration (for full information, also on the data sources, see the end of the post).

We also chose to use real-world data, to allow not just benchmarking of clock speeds upon completion of a given analysis, but also to allow for testing.

Generally speaking, we do not endorse any of the methods used as "standards" or "recommended", in fact, because we aim to start simple and avoid as far as possible non-essential packages, methods may be very much not recommended. Future updates will implement more advanced methods, a wider range of packages, etc.

Suggestions and contributions for datasets or methods are welcome.

In this post we wanted to get feedback on "version 1.0" of GenBench, and thought a nice way to do that would be to run a little experiment in the hope it would generate interest/support/glory.

Currently (as of June 2015) GenBench includes ten benchmark scripts, each containing several microbenchmarks, covering topics from microarray analysis with limma, graphs with iGraph and some machine learning as might be applied to patient profiling. We thought this was enough to make some comparisons across different versions of R, to examine the real-world effects of recent upgrades to GNU R.

Specifically, we ran the full suite of benchmarks against the following releases (compiled from source using this script:

After installing the various versions of GNU R, we set up a Jenkins build job to run the full collection of benchmarks five times (consecutively, to avoid any competition for resources) and upload the resulting timings to our database:

First we prepare the environment and connect to the database (GenBench also contains code for working from local files, and for setting up your own database).

Each benchmark is "grouped" (i.e. put together with other benchmarks that work on similar topics/data) and consists of several microbenchmarks (i.e. timed blocks of code). For example, in the "mrna_seq" group, we currently have only one benchmark (which uses the edgeR approach, future plans include adding other methods). The timings for the individual benchmark runs can be seen here: 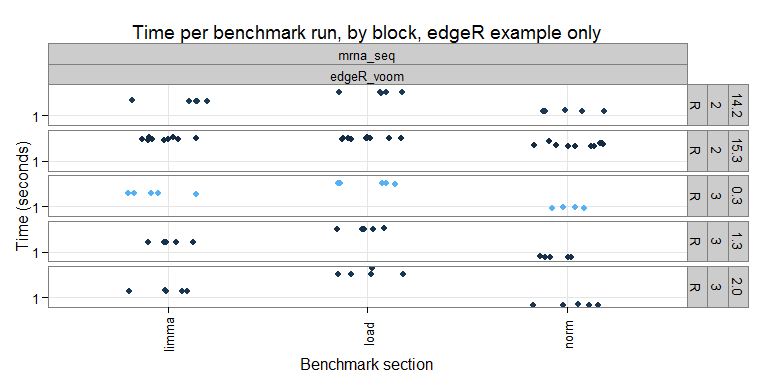 On the x-axis we have the individual sections, and the y-axis the timing (elapsed time in seconds). It is nice to see that the timings are pretty consistent within a given R version and section. I wonder if more variation would be seen benchmarks using parallel computing?

The full results for this test run can be seen here: 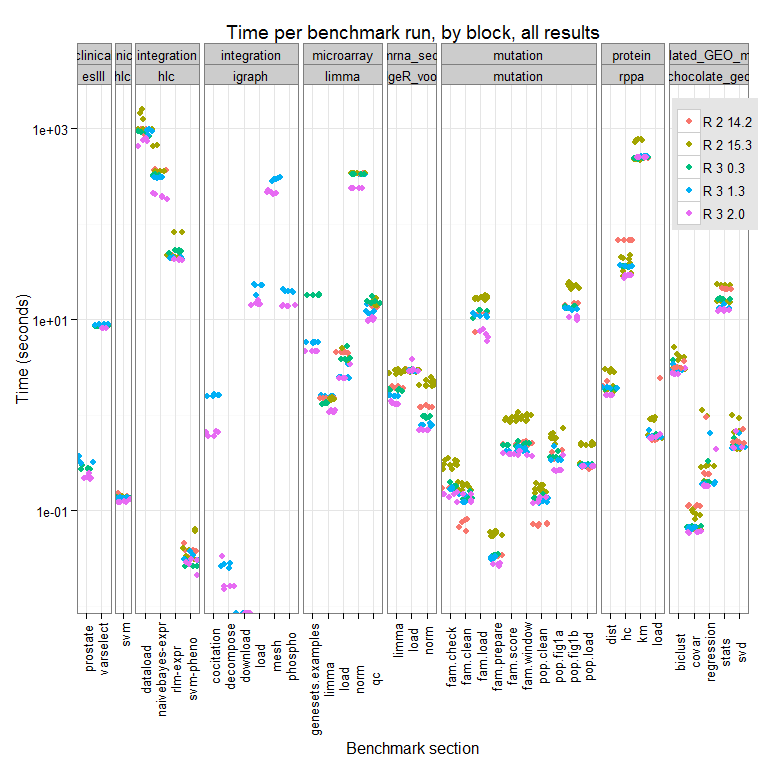 We can see differences across the R versions and the trend appears to be that newer = faster, though there are some cases where R-2.14.2 (the oldest version we test here), outperforms all other versions tested. We are looking into why this might be.

Perhaps a better way to view this is to look at the total time for each benchmark (summing all the microbenchmarks), and scale to the lowest R version tested has an average value of 100: 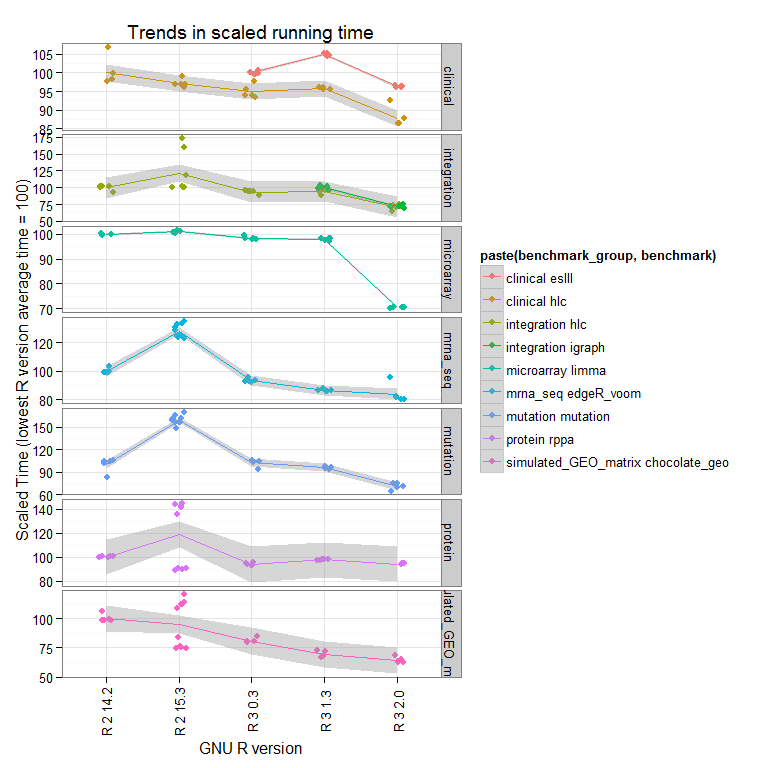 Now we see that the overall trend is that newer versions perform better overall, and that R-2.15.3 does some strange things (we are running further tests to see if this is reproducible).

Some quick stats on those trends, looking for significant differences in time across the microbenchmarks when comparing the different versions of GNU R tested (using both a parametric and non-parametric test):

Let's have a look at the top results, sorted by Kruskal-Wallis:

Interesting to see that the biggest performance changes are found in iterative tasks and not in data loading or well-established statistics, for example in the "mrna_seq / edgeR" benchmark, we only see a significant difference for computing on the data, not for loading. But considering that the data loading represents most of the time, this represents only a small gain overall. This also illustrates the importance of having ecologically valid benchmarks, because though updating R does bring speedups, for the informatician at the bench there is limited benefit as the speedups are not global.

To the best of our knowledge, GenBench currently provides the most comprehensive suite of real-world benchmarks for genomics. Using these benchmarks, we have demonstrated that performance improves as new versions of R are released. However, speedups are not global as only iterative tasks show significant improvements.

Going forward, we will work on extending these benchmarks as much as possible and to include the usage of (more) Bioconductor packages. The ultimate goal is to compare the performance of Renjin versus GNU R as we make improvements to Renjin's internals.

Feedback, bugs, pull requests, comments, are all more than welcome! We include a "TEMPLATE" benchmark to make it easy for people to add their own ideas.

We conclude with some background on the data and the code behind the benchmarks.

All data is publicly available, sourced from various places (for further information please see the individual README files accompanying each benchmark in the GitHub repository):

(b) Protein Expression Data - RPPA platform - Data was sourced from Hoadley et al, using the TCGA portal - Mass Spectrometry is not yet implemented

(d) Simulated matrices (to allow for testing scale, as in orginal GenBase project)

(a) Gene Expression Data - 3' Microarray Methods typical for microarrays including RMA and MAS150 normalisation, differential expression with limma, and some gene-set tests.

(c) Genetics Data This section is still quite under-developed, focussing on summarisation of allele frequencies, and some sliding window methods. Implementation of "proper" genetics analysis methods is a burning priority!

(d) Simulated data Focus on the linear algebra and stats operations below: